First Rally for Bears, Oh My! 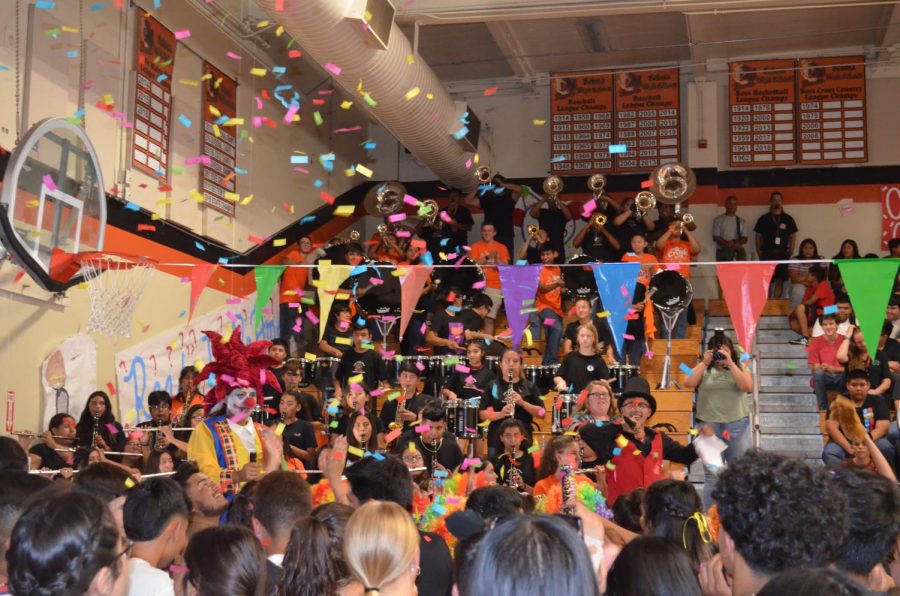 Students gather in front of the SHS Band as they play the "Fight Song".

Selma High held its first rally on Friday, September 6th, 2019. There were two scheduled rallies, in order for everyone to enjoy comfortably with plenty of space. The Leadership team took charge of the circus-themed event as they dressed the part and named it, “Bears Under the Big Top”, which involved student and staff participation in their many crowd thrilling activities.

“I’m very impressed with this rally. I appreciate the effort the leadership team put into it,” said senior Victoria Sanchez. “It is a huge improvement from years past.”

Sanchez expressed that in her four years of experience of being able to see the changes, rallies from the past don’t compare to rallies now. Along with Leadership putting in more hard work than ever, the cheer team performed, and Leadership has also been incorporating the new Pep Band within these events by giving them their own section in the stands.

“I appreciate how much the band has been included in the rallies,” said junior AJ Montijo. “I think it adds a different kind of energy and the students have expressed that they enjoy having us be a part of it.”

Montijo is the president of the band program and has been a member of Selma High’s drumline since his freshmen year. He has enjoyed seeing the changes the school has made by being more open to programs collaborating in order to make something bigger than themselves.

“This rally was definitely one of the best we’ve had for sure,” said senior Daniel Perez. “People actually got involved, it was also a good balance between band and Leadership so it was super hype.”

Perez, who is this year’s drum captain and usually leads the drumline in the rallies, couldn’t agree more with his peers as he found that it was a good mix between “traditional and modern hype” as a way to jump back into school’s full swing.

“I’m super proud that the sophomore class won the second rally,” said sophomore Abi Baker. “It was a really fun experience that I got to participate in and enjoy with my friends.”

Baker was a participant in the rally and shared that events like these help bring people closer together. She loved the activities that were selected and thought that the students enjoyed not only watching their classmates, but Jeter as well while he jumped through hoops in front of the crowd

“My favorite part about the rally were the activities that students got to be involved in,” said freshman Makaira Chavez. “It’s really fun being on the Leadership team and having the opportunity to work with others, who are always so energetic and want the best for all the events that we put together.”

Chavez is more than excited to be a part of this year’s Leadership program. Like others, she can’t wait to become more involved as she is looking forward to what the rest of the school year has to offer.