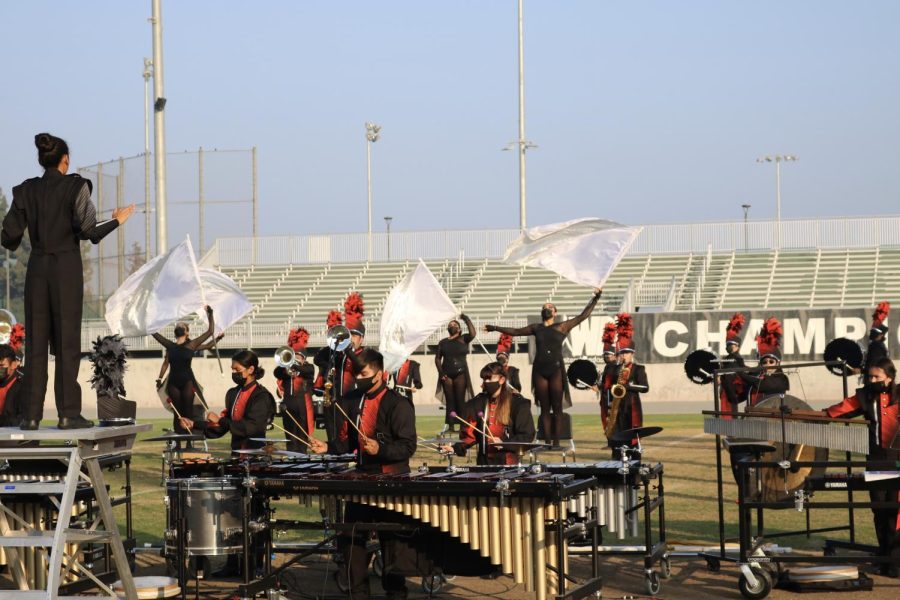 For the first time in school history, the Selma Black Bear Brigade Band and colorguard won at the WBA (Western Band Association) Championships at Kingsburg High School on Saturday, November 13. As a part of Class 1A, their field show earned a first place score of 76.475. For category awards, they won best auxiliary (colorguard), best percussion, best general effects, and best visual.

Their piece was called Con“CHAIR”to in reference to “concerto,” which is the term for a solo piece of music that is performed with a band or orchestra accompanying the soloist. The word “chair” is emphasized because everybody had chairs that they moved throughout the show to give the field a concert hall effect and to use as a prop to stand on, sit down on, or as a part of their choreography. To stay true to the meaning of concerto, there were many solos sprinkled into the show to feature different students’ musical talent.

“We wanted to highlight a bunch of our students, so we wrote a show that revolved around a lot of different solos,” explained band director, Mr. Lima. “I think it was their best run of the season… I am very proud of them.”

The band put much practice into preparing for each show. They have three hour long night rehearsals twice a week and then six hour Saturday rehearsals. They also had to catch up a lot of the younger students because they haven’t had as much experience playing with the band due to the pandemic.

“We’ve been working really hard since the last week in July up until last Saturday,” stated senior Alexa Alvarado.

After having cancelled winter percussion and winterguard championships due to the shutdown, it was hard to start up a normal season of competitions.

“Getting our momentum going again was the hardest thing to overcome,” stated Mr. Lima.

Not only was it difficult for the band as a whole to get back into the feel of a normal year, but individual students also had to overcome their own challenges.

“The hardest thing for me was marching backwards and dynamics,” stated Mikaia Orosco.

The students had to learn a lot of drill, which are the steps and positions on the field that collectively make up the show, along with memorizing their music at the same time.

“[For drill,] they give you a dot sheet and it’s basically like a math grid,” explained sophomore Brendan Rodela. “You find your dot and move to your next dot by marching.”

More experienced band members had to keep everybody motivated because many of them were marching for their first time. They also had to make sure that they were mentally prepared for the competition by going over the show in their head and keeping calm when performing on the field.

The band’s diligent preparation paid off, earning them the first place prize and making them stronger as a whole community of musicians.
“Our ability to connect with each other [is our biggest strength],” expressed Alvarado. “Not just music-wise and performance-wise, but friend-wise too. We spend so much time together on and off the field.”

With field competitions in hindsight, the SHS band and colorguard is looking forward to their upcoming events and activities such as the Christmas parade, winter guard, and winter percussion.