Between Harsh Truths and Lovely Lies 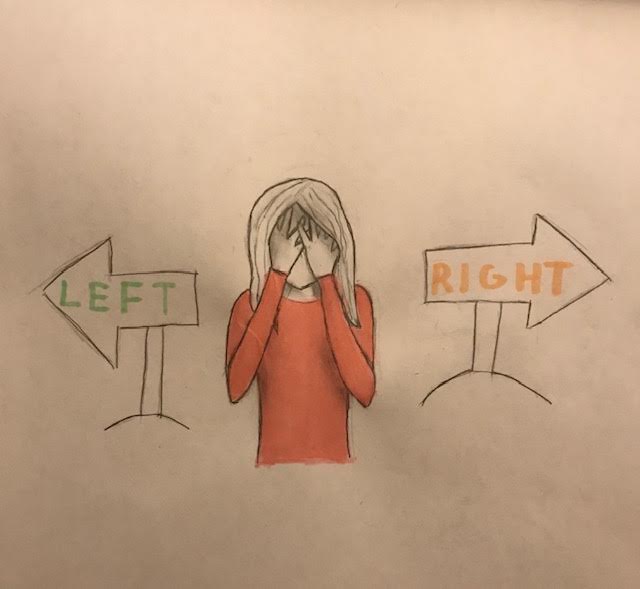 Something I have found myself enjoying for a large part of my life is recounting and writing down my dreams. Often, they are quite vivid, or may be particularly strange, which makes it enjoyable to look back on all the peculiar events my brain conjures in sleep. Recently, however, this dream really took the cake for how weird my dreams can become. Whether it actually means anything I know not, but regardless, please enjoy.

We begin with a scene of your average suburban neighborhood, with perfectly manicured green lawns, white picket fences, two-car garages, the works. I walk along the almost flawless sidewalks with a good friend of mine, happily talking about our days thus far. Immediately, though, I could tell that something was off about this place.

The houses I passed were just a little too identical, and their bright turquoise hue shone as if someone had turned up the saturation slider on my eyes. Everything gleamed in, well, a dreamlike manner. Nothing felt totally real, which was fitting, because it wasn’t. We walked on for what seemed like miles.

Soon that almost endless cul-de-sac did come to its end, and we turned to join a quickly growing crowd on the opposite side of the street. They sat under a large canopy, watching some sort of speech or event. My friend and I parted ways, and I sat down among the crowd, waiting for something to happen.

But whatever event that was supposed to have taken place was over before I had time to process it had started, and the crowd slowly began to get up. To my confusion, however, no one actually left, and instead started to file into a line, entering a warehouse looking building I hadn’t seen previously.

Of course, my natural inclination was to follow everyone else, and upon entry I was met with the sight of even more people. They had lined up alongside of us as we walked, creating a path for us to walk through. Every one of them wore bright, multicolored shirts, and grinned widely as they stared at us. I continued to walk further, much further than the size of the building should’ve allowed, growing more disoriented by the second.

As our line continued to drag on, eventually a fork appeared in the path of people, splitting our queue into two. The two sides each represented a choice. Choosing the path on the right would allow you to hear things that were lovely. On the left, you were able to hear what was true. I began to ponder my options before I reached the fork, and I decided that it was better to accept the harsh truth rather than a lovely sounding lie. I approached the path that had called me.

But as I continued, I started to be able to pull words from the pulsing sound of conversation emanating from the room. I could hear the people forming the “lovely” path begin to gush to those who had chosen their side, saying things like, “You are perfect!” “Gorgeous!” “You are without flaw!” “Everyone loves you!”

In my mind, I knew the other path was the easy one to take, and that it would have felt amazing to have hundreds of people admiring me as if I were perfect. But in the end, it was better for me to hear what was true. I braced as I anticipated the words that I felt were about to be pelted at me.

And they never came.

My eyes opened up once again, as the path became silent. In fact, the whole room fell into a hush. There was no longer anyone in line in front of me, just those lining the sides. Their ominously wide smiles fell away, becoming as expressionless as an inanimate object of your choosing. Carefully, I placed one foot in front of the other, and all of the people began to open their mouths.

No words fell from their lips. Although they opened and closed their jaws, only strange sounds tumbled out, ones of smacking lips or clucking tongues. I began to walk faster to try and escape this mess as quickly as possible, but more people appeared every time I thought I was remotely  close to the end.

Their noises grew in volume, beginning to tightly grip my head and violently wrench their way into my thoughts. The twists and turns of the path kept popping up as I broke into a run, constantly one more step from going insane.

And suddenly, I noticed the people forming my path begin to grow quieter. The spaces between them grew from being shoulder to shoulder, to inches apart, and gradually growing wider. I slowed down again, this time to a slow walk, as the gaps became multiple feet apart. I looked around, starting to meet their gazes once again.

When the spaces were about 15 feet apart, the noises had fully silenced, and I rounded one final corner to have the exit finally, finally appear in my line of sight. I also encountered my grandparents, who were the final two people left on my path. They welcomed me over with open arms, and real, genuine smiles, something I hadn’t seen most of my morning in this dream so far.

I hugged them tightly as they told me how they loved me, and I knew this time, it had to be true (I was on the path of truth, after all). As I let go of the hug, my grandma handed me a bundle of those fake plastic flowers you can buy at the dollar store, and I just started crying. However, I could tell they weren’t tears of joy, nor were they of sadness, but simply ones of confusion and overwhelmedness.

I finished walking and met an old woman by the warehouse’s exit door. She smiled at me, ushering me out, and said, “it’s okay; you can leave now.” I nodded and opened the door, free from the madness at last.