Los Paisanos Show Off Their Skills 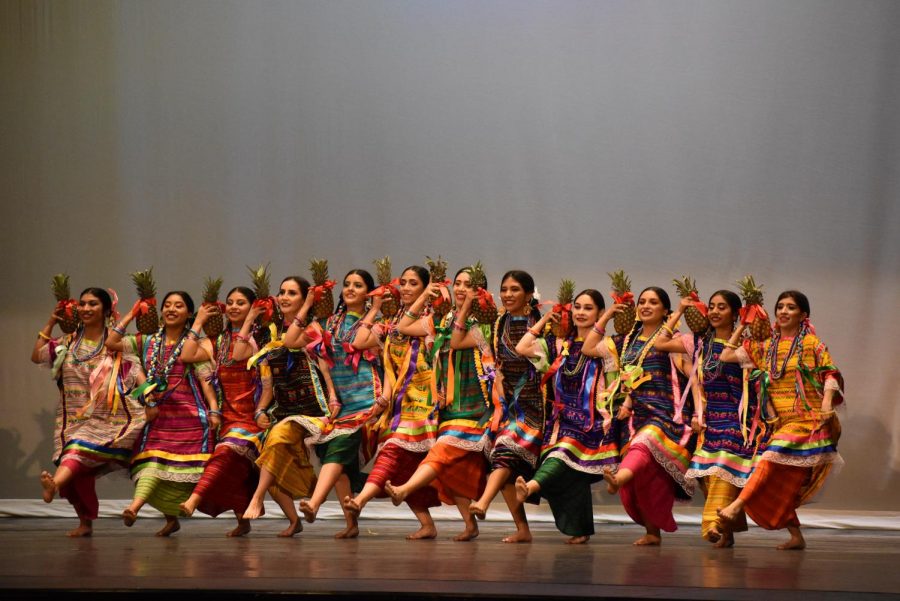 Los Paisanos perform at their annual Show Off. Photo by Dashrit Pandher

The Selma High Mexican Dance ensemble, Los Paisanos, performed at their annual Show Off on March 1.

The Show Off consisted of different high schools who gathered at the Fresno High School Royce Hall. Each Folklorico group was given a different Mexican state or region that they were to represent in their performance. The dances explored different aspects of the rich culture of the area and highlighted traditional aspects of each region.

Los Paisanos were given the state of Oaxaca, which they represented through four different dances: Jarabe Mixteco, Pinotepa, a dance for the Ofrenda, and Flor de Piña.

The dances are part of an Oaxacan celebration that takes place in July called Guelaguetza. This is a celebration of the gifts of nature, and in reverence to the crops and plants in Oaxaca given by God. They purchased vibrant new costumes and some performers had very colorful, unique make-up for their performance.

Jarabe Mixteco is a dance of love performed in a duo between Ramon Martinez and Gracie Barranco. It’s a very flirtatious dance that’s meant to hint towards love and marriage.

Flor de Piña is a dance celebrating the pineapples grown in the region. While performed, the dancers focus primarily on the pineapple and act as though they are obsessed with it to show the audience their gratitude and appreciation.

Pinotepa is a community within Oaxaca who takes part in the celebration and has their own style of dance that was showcased by Los Paisanos.

The dance for the Ofrenda was meant to show the dancers giving gifts to the deceased and to the God being celebrated.

Starting in December, the group worked during their break with professional dancer, Jenny Robles, who is also a Oaxacan native who taught them four dance styles they would be performing. The clinic focused on technique as well as understanding what the dances were made to represent.

They used their class and lunch time to perfect these different styles for this event with the goal of properly interpreting and executing the dance.

“We started at the beginning of this semester and after school,”Ramon Martinez explained. “We also had the opportunity to collaborate with a dancer from Oaxaca.”

It was important to properly express and showcase what exactly this region celebrates and expresses through such cultural dances.

“Oaxaca, Mexico, is where I’m from and it’s an honor to represent the motherland,” stated senior Gracie Barranco.

Advisor, Ms. Salgado, pushed her combined intermediate and advanced groups to their absolute best so they could properly represent an area of Mexico that many members of the community are from.

“It was really nice to represent Oaxaca this year because it’s a state that is commonly done, yet there’s a big Oaxaqueño community here in Selma,” stated Ms. Salgado. “The feedback from the students showed they were really proud because many of them are native from there.”

There was also a lot of pressure on keeping up the reputation of Los Paisanos and their well known technique.

“It was very stressful for Piña because Selma High School is well known for our straight lines and that added a lot of pressure,”remarked Martinez.

As the performance came closer, the hard work had shown its impact positively to the performers as they rehearsed the most stressful aspects of their performance.

“It was nerve-wracking because our dance is about being symmetrical in our lines,” stated Figuroa. “We didn’t really have that at first, but last minute it came out pretty good.”

The day itself proved to be hectic as the dancers got ready to perform at the Show Off. With an early start, the dancers had a morning of rehearsal and preparation for their performance which held four costume changes within it.

“The whole day starts really early in the morning when we get there,” Gracie explained. “We have to put our stuff down, rehearse, and do a quick run through.”

Afterwards, the performers received praise from other schools and got to observe other dances of the different Mexican states.