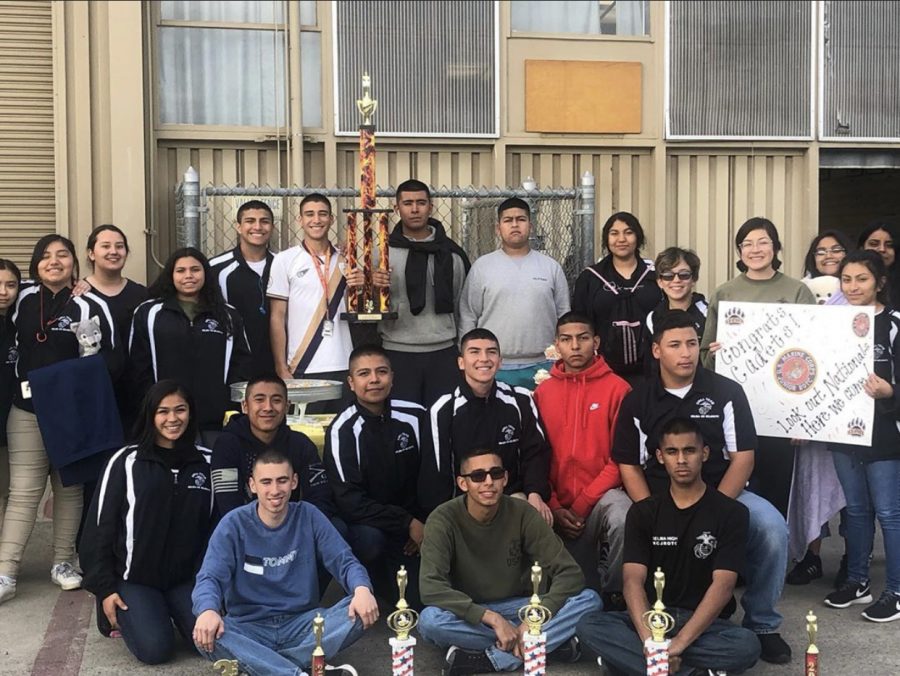 Selma High’s MCJROTC drill team won first place in their annual drill meet on Friday, February 28th, taking place from sunrise to sunset. Traveling for over seven hours, the team met in Yuma, Arizona, at Kofa High School to compete against many other groups who were all equally prepared to show off their skills. As their name was called on the list of first place winners, Selma High erupted into cheer and laughter as their hard work had completely paid off.

The entire meet spanned over two entire days, taking place both inside a gym and outside on a football field in Arizona’s searing weather.

“It really was a difficult challenge,” explains sophomore Brian Rios. He shares that some of the best drill schools were there, side-by-side practicing their drill cards and routines.

“It was tough with constant repeats throughout the day, but we had to do our best to come out on top.”

Selma High’s drill team had been constantly rehearsing their exhibition in hopes to achieve their first place in multiple categories, including individual matches, marching both unarmed and armed, and commander competitions. The members were extremely excited to be able to unveil the hard work they had put in and represent not only their program, but their school as well.

The only female on the armed team, junior Leslie Espinoza, also expresses her feelings on the program.

“The drill team is very competitive for those who are in it,” she expresses. “We understand the hard work it takes, and we love what we do.”

The drill members span from a range of freshman to seniors, but are immediately put on the same playing field when it comes to their tasks.

“I didn’t expect to enter in as a first year and achieve so much,” says Andrea Durantes. She is one of the few freshman taking part in such a developed group. “I expect as a team we work hard and compete the best we can.”

As a result of their matches, the team earned a ticket to Daytona Beach, Florida, to participate in the Marine Corp National Drill Meet.

“For us to be able to go to nationals is actually really cool, being able to experience it and all,” states senior member Jason Porras. “To think that we’re going there, representing our school, out of so many in the nation… it’s insane.”

The group’s Master Sergeant, Msgt Cruz, also shares his reaction towards the team’s placement, from an on and off the drill deck perspective.

“It was the best they had performed all year,” Msgt Cruz states. “Even though there were some crucial mistakes that were made, I wasn’t surprised that they ended up in the top two. They did very well.’

Continuing throughout the year, the Selma High JROTC drill team would appreciate peer support as they prepare to advance to finals.