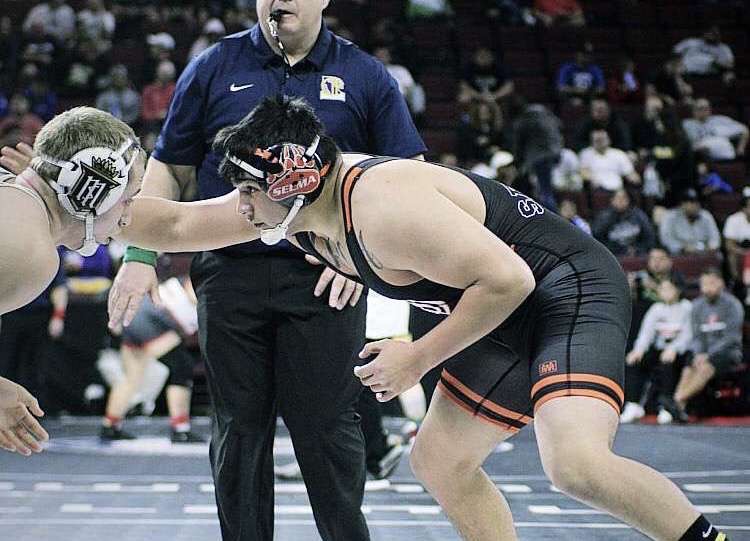 On February 14th the official season for the Selma High Boys Wrestling team ended and post-season began, starting with Valley Championships where the team ranked third.

Valley lasted for two days and consisted of any wrestlers who made weight. After Valley came Masters on the 21st and 22nd and State Championships on the 27th, 28th, and 29th. For both Masters and State the boys qualified by ranking in certain places.

At this point of the overall season, competitions are namely individual but each individual competition contributes towards an overall team title.

This year the team aimed at winning a State title, and while they fell short at fifth place they still felt they performed outstandingly.

“As a team we did wrestle better than what they reseated and that’s all we can expect from our athletes when it comes to wrestling,” Coach Sam Lopez comments.

The season is long and grueling, and requires just as much outside work as in-practice work. The days start early and end late for the boys, as they put in extra lift or technique hours before the day starts and at the very end after practice.

“I wrestled like I had nothing to lose because I didn’t,” expresses senior Isaiah Hernandez. “I believe it’s the only reason I went as far as I did.”

As with all sports, there were some shortcomings and challenges the team faced throughout the season. Figuring out weight classes and spreading out the line up to have as many people competing in different weight classes as possible was one of them.

“We were a little short-handed on the heavyweight side of the lineup, but many guys stepped up and performed really well,” states senior Tristan Lujan.

This year at state one member of the team became the first 195 pounder in Selma history to place at state. Rudy Garcia, a senior heavyweight wrestler, is the face behind this record and took eight place.

As the season draws to a close the boys keep both their shortcomings and goals in mind and begin to prepare for a new season in a new year.

“As a team I wished we could have worked a little harder and committed to wrestling a little more. Only a couple [of members] were willing to put in the work,” junior Richard Figuero states. “But we knew we wrestled hard every match and just have to get ready for next year.”