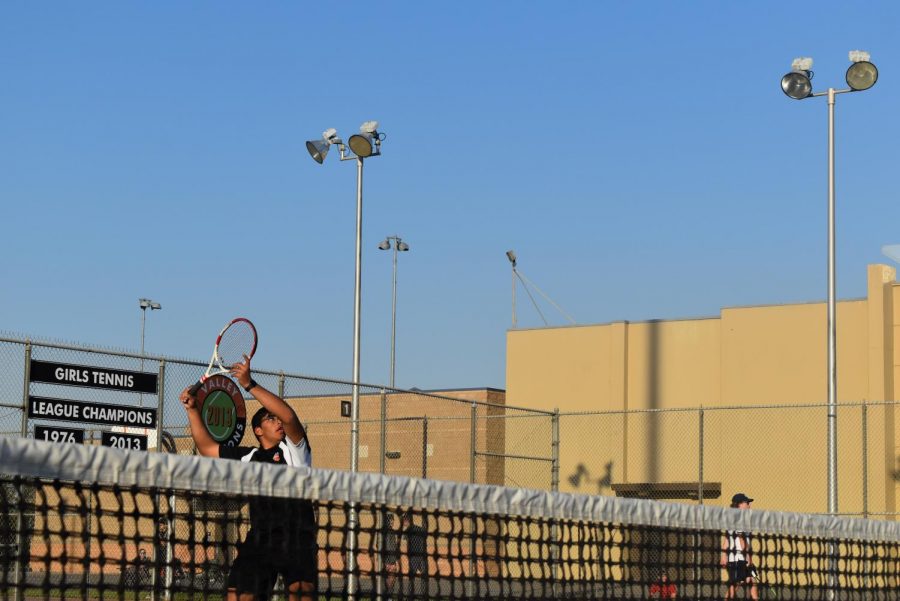 Senior Simran Bains gets ready to smash the ball. Photo by Dashrit Pandher

The Selma High boys tennis team has officially started their season as of March 2nd, 2020, with their first ever game against their hardest opponent, CVC. They lost as a team 3-6, with the three wins being first and second singles, and first doubles.

In every match the two teams play a total of nine games, 6 singles, one versus one, and 3 doubles, two versus two. In the singles’ matches, the players play two sets each of which are won by the first player to 6 points, win by 2. In doubles, it is the first team to 8 points in one set, win by 2.

The match against CVC was a harsh wakeup call that was necessary in order to motivate the team to push themselves.

“It might hit a dent in confidence in their skills, but it’s a good wake up call for them,” according to the varsity coach, Coach Cortina. “If they really want to compete and get better they’ll learn from their mistakes so that way it doesn’t happen again next round.”

The coach is not the only one sharing these sentiments. Second year, sophomore Owen Wenter said, “It was a good wakening for us as most of us [lost], but it showed what I had to work on.”

Not only does CVC test the team’s physical prowess, but it pushes the boundaries of their mental game. Mental game within tennis is just as important as the physical prowess for the game. Players can easily get frustrated from a miscalled ball or a wrong hit which can completely throw off their game, and this is where the team finds its weakness.

“Their biggest weakness is mental game. Their focus on the court can be there but [when they] get in their head they tend to lose games they shouldn’t,” stated Coach Cortina. “Refocusing on that mental game is a big issue we have.”

While the team may struggle with their mental game, Coach Cortina has gone over the fundamentals over and over again in order to help them, and it began paying off.

“I stayed in it today, and definitely gave it my all. I stayed positive, and when I got frustrated I reverted back to what I know,” revealed senior co-captain and number one Jake Harris.

Mental game is not the only weakness the team is facing, but they also face a lack of experience. Majority of the team is underclassmen, which is good for the future, but right now they have a steep learning curve ahead of them.

“This team is very inexperienced compared to previous years, but we do still have skill. The only returning upperclassmen on varsity are Jake and I, so the rest of the team does struggle, but they just lack experience,” admitted senior co-captain, and number two Simran Bains.

Harris won in singles along with Bains, who played close to a 3 and half hour match, and in doubles Wenter and Bains secured the win.

“I was sick and during the first set I let it get the best of me and lost the first set, but I was able to gather myself and win the second set. I then went on to win in super tiebreaker even though I felt terrible,” revealed Bains.

The team has just started off their league, but they have already set forth goals they wish to achieve in the coming season.

“I would definitely love to go undefeated, so for that I’m gonna work hard. Also, I really want to win the league and go to Valley this year,” stated Harris who wants to finish his senior year with a racquet.

The boys don’t only have personal goals, but team goals as well.

“The team would like to get past quarter finals in playoffs because that’s the farthest that we’ve gone since I’ve come to high school, and then hopefully we can win Valley. This is something we all want and are gonna fight for,” said Bains.

Selma High Boys tennis may have got backhanded on their first game of league, but they are not letting that hinder their spirit to win. The team will continue to strive forward to learn as much as they can in order to win this year and make this year one of the best for their two senior captains.