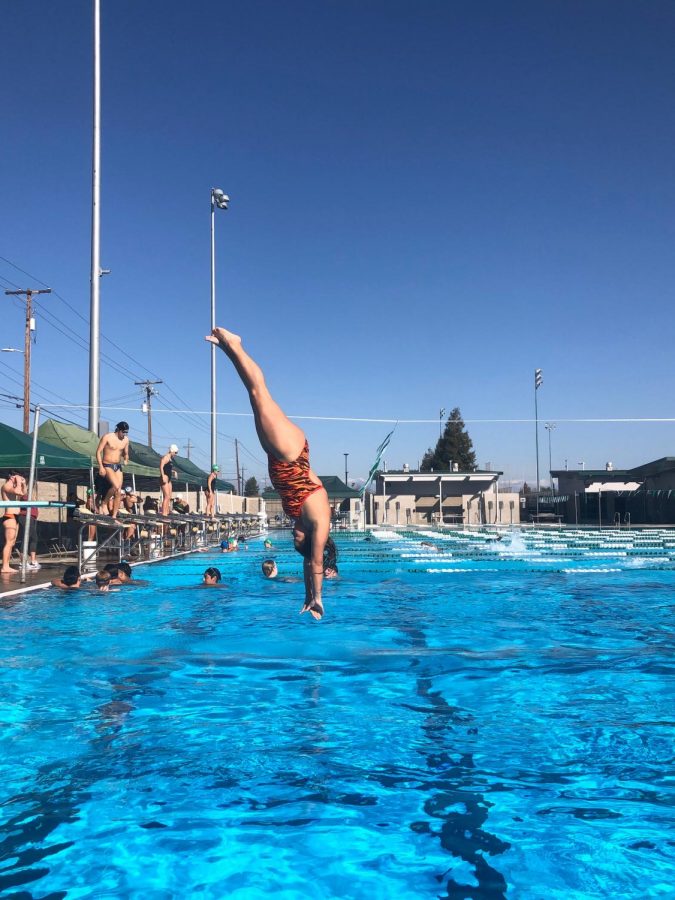 Brooke is going in for a dive. Photo by Julianna Colado

The dive team has started off great this season and have been putting in the work to get to where they want to be. Since last year, two new members have joined the team, and they are going through the process of learning the basics.

The team has set goals for themselves and want to make the best of it.

“I want to get my dives clean and win league,” said Ashneet Gill.

Also Paul Ortiz has one major goal in mind and wants to make it to Valley.

“Last year, I got 24th in Valley and my goal is to beat that,” said Ortiz.

Coach Loucks also has goals for the team.

“I want each person on my team to be able to learn six dives because that’s how much you need to compete,” said Loucks.

Sophomore Brooke Machado has recently joined the dive team and is excited for this season. When she first started, Machado was scared to do her dives, but later she had realized improvement and has started to get the hang of it. Brooke has a goal in mind that she wants to get to as well.

“This season, I want to learn eleven dives because I want to be able to qualify for league,” said Machado.

Kingsburg and Exeter are the team’s rivals including Golden West, but they only have one diver on the team.

“Kingsburg and Exeter are the only two that have divers in our league,” said Coach Loucks.

With a team of five, the team chemistry amongst the players is strong and they’re all closely bonded.

“Whenever we practice we are always having a good time,” said Ashneet Gill.

Practice helps them bond with each other and they become closer.

“We are all nice to each other and make great memories at each practice,” said Paul Ortiz.

The dive team has been pushing themselves hard and hope to have a wonderful season.