Girls Wrestling: More Than a Match 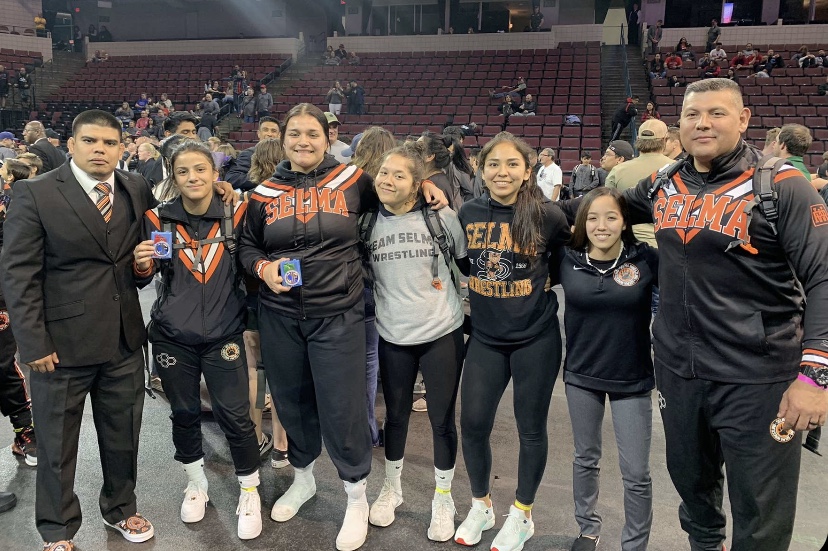 The Selma High Girls Wrestling team went to the Division 1 State Championship held on February 29th, 2020 in the Robo Bank Arena in Bakersfield. Although the state qualifying team only consisted of four girls, they were still able to finish in 7th place overall.

“Selma’s team is unique in that the girls practice along with the boys,” shared Coach Regina Doi, when giving key points in their successful season. “We try to get them to their breaking point, and the girls respond well to the challenges we give them every day.”

The Selma High’s girls wrestling program has been known for its success in the past for conducting joint practices in order to prepare the girls for their matches. This helps push them mentally and physically in order to overcome their personal obstacles.

“Our goal was to do our best overall as a team as well as individually,” said junior Vanessa Mares, a two-time state qualifier. “I achieved as much as I had hoped for and am happy to see our improvements paid off. As a team, we had to overcome many hardships, but we pushed each other to never give up”

Success did not come as easy as some may think, the team faced major obstruction.

“The biggest challenge was dealing with injuries, injuries that really hindered our chances at winning the state tournament this year,” informed Coach Jose Mendoza. “We lost two crucial members of our team just before the midway point of the season, so we went from the state contenders to finishing third in our section.”

The girls had to endure difficult practices that entailed daily challenges of constant drilling and conditioning that ultimately taught them adversity.

“I overcame the challenge of continually pushing myself even when things got hard, especially in times when I felt like quitting,” stated senior Melanie Mendoza, who was ranked second in the state and stayed consistent in placing second at the championship. “It was all worth while in making the state finals and hearing my Selma family cheering when my hand was raised.”

Some claimed that their personal results in ending their season could have been better, but the memory of those feelings will feed their ambitions and drive when continuing in the years to come.

“Personally, I finished the year off strong and I’m not fully satisfied but there’s still a lot for me to learn,” expressed junior Arykah Cuevas, who also attended the state championships for her second year. “There was no particular favorite part in the season of mine, but all I know is that it was memorable for sure.”

Others hope to gain from their experience at the championship in order to continue to work hard in their efforts and improve their abilities.

“I did not place. I came one match short,” conveyed junior Mariah Valdez, as she partook in the state team for the first time. “My favorite part about this sport is doing what I love. I worked hard to reach my goal to go to state and my next goal is to place at next year’s state championship.”

While this was the end of the road for some, others still have to prepare for the next step in their wrestling career.

“The girls are resting up now but will be getting ready for the freestyle season,” shared Coach Marina Doi. “Melanie has Fargo Nationals, Junior World Team Trials, and college to prepare for.”

Mendoza has an exciting future awaiting her as she takes on her last events as a senior.

“I tend to prepare myself for the coming events by taking everything in because it only happens once,” expressed Mendoza. “Wrestling has been such a huge part of my life since I was little and I couldn’t imagine myself doing anything else.”

As Mendoza takes on exciting endeavors of her own, the team looks toward the future.

“The hopes for next year are the same as always, to be state champions,” stated Coach Jose Mendoza. “We’re hunting for title number four, in which we need to remain injury free considering that we have a relatively young team, the returners and underclassmen will be crucial in the coming seasons.”