Winter Guard Holding On To Passion 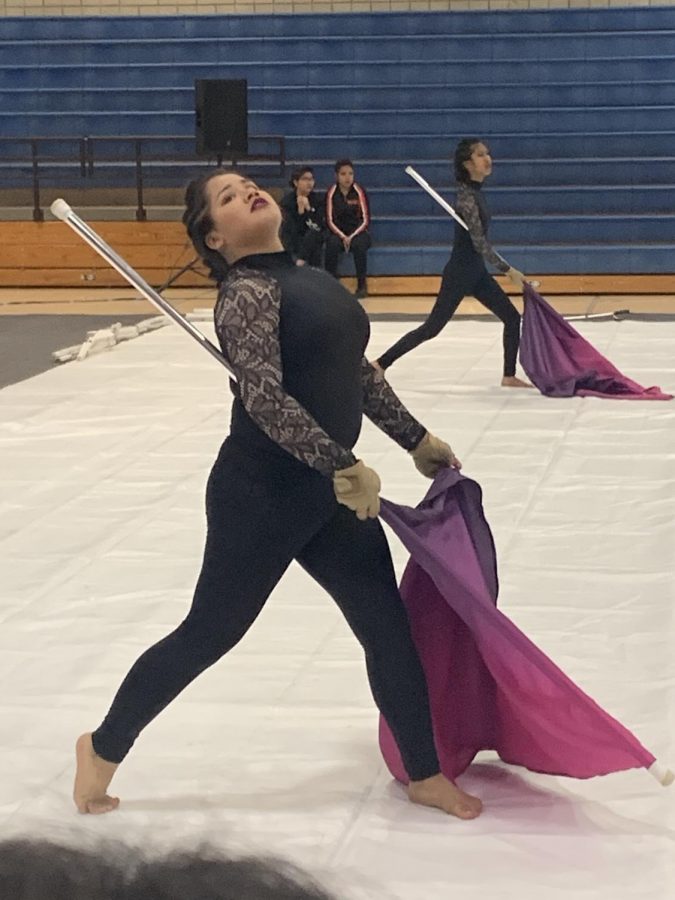 It’s a Friday evening and you’re walking onto campus. As you draw near the gymnasium you hear announcers and applause. Your immediate thought that it is a basketball game deceives you. Upon walking into the gym you realize that in actuality, it’s an SJVCGPR Winter Guard competition.

This season, the Selma High School Winter Guard took on a different concept with their show, “Hold Me”. An incredibly emotional show, the guard gracefully captures the feeling of reaching out for support during a dark moment in life, when the weight of the world seems too heavy to carry. The 12 members hope to visually tell that story.

“Performing has always been something that has made me feel free in a way because every show helps me connect better to my feelings and the concept of it,” said senior Pebbles Wingfield. “This show has helped me a lot because it lets me express my struggles and hardships by performing and just letting go of the thoughts holding me back.”

Not many know that Winter Guard at SHS has been dominating in the Valley with three SJVCGPR championship titles and advancing to WGI finals multiple times within the last four years. This year the girls have consistently placed top three in their division, Scholastic A.

Junior Brianna Martinez expands on how these major achievements have shaped her as a performer.

“We’ve grown as an ensemble and this just makes me feel more confident and less nervous as a performer,”stated Martinez. “To have other people on the floor who care affects the overall performance.”

Throughout the season, the group puts in over 90 hours of rehearsal time alone. The physical aspect of the show is testing, requiring skills like contemporary dance and experience with equipment such as flags, rifles, and sabres. However, the real practice is all mental.

“I make sure that even after rehearsal, if I don’t understand some rifle work or choreography, I practice at home and over the weekends until I am comfortable enough to show my peers and my instructors,” shared Martinez. “Working on those nerves is sometimes the biggest and hardest obstacle.”

The Winter Guard at Selma High is adept in teamwork and synchronization after, for some, years of strenuous practice. This art form requires a lot, but those who are passionate reap the benefits.

“Most people don’t realize that we create a bond and find the love of performing through one another,” confessed Wingfield. “It’s also a type of therapy, a place to let go, have fun, and put on a good show for the audience.”

Winter Guard instructors were unavailable for comment due to strict schedules.