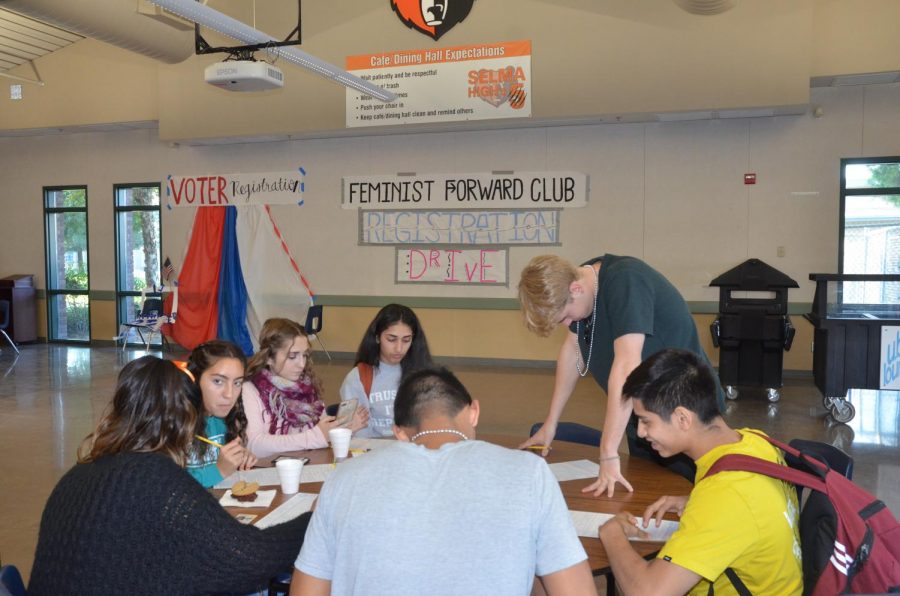 Throughout Selma High there are several clubs that find different ways to engage with our community and student body. One of these interactive clubs is the Feminist Forward Club. This club, like others, aims to provide its members with new, innovative knowledge and skills. However, every club is unique and so is their course of action.

Feminist Club aims to empower the youth of our community through education and advocacy efforts. The club officers consist of Co-Presidents Anna Armstrong and Chloe Mendoza, Vice-President Victoria Sanchez, Treasurer Bella Porras, Social Media Manager Mia Guerrero, and Secretary Seth Ruiz, as well as Ms. Loving as the advisor. Each officer has their own set of responsibilities in order to assure that the club operates at its best.

This year in order to increase civic engagement and voting awareness, they held a nonpartisan voter registration on campus. One of the Co-Presidents, Anna Armstrong, picked up the voter registration forms and taught the students who participated how to fill them out.

In addition to this, the club also took part in a local service project this last holiday season in partnership with Selma Cares. Co-President Chloe Mendoza aided in organizing a clothing drive in which a significant amount of clothes was received and distributed to families in need in time for the holidays. The club also registered students as volunteers for Second Chance Animal Shelter when they participated in making toys for the shelter. The most recent engagement though, was the San Francisco Women’s March on January 18th.

“We did this to empower all of the members of the club who attended. There is such a wide array of speakers that everyone can usually find a speaker they resonate with and are empowered by,” stated Anna Armstrong. The club made its way to San Francisco as early as five in the morning on Saturday. Once they arrived at Dublin, they took the BART train to the Civic Center where the speakers presented themselves.

“We attended the Women’s March as a club in an attempt to give our members new perspectives about world events,” explained Chloe Mendoza.

This year, the group that attended the march increased in size compared to last year, which was greatly appreciated by the trip’s coordinators. In addition to the officers, advisor, and members, a few parents as well as teachers attended the march alongside the club as supporters.

“There are a lot of misconceptions that people think about feminism, but if you come to our meetings to ask about it, we are more than willing to educate and provide truthful information,” exclaimed Treasurer Bella Porras. As treasurer, she is in charge of the money that goes in and out of the club. If any members have questions about where and what their money will be used for, they go to her.

“We would love people to give us new ideas for what they would like to see on campus,” asserted Anna. “Contrary to what many believe, our club exists to be an entity and catalyst of change in the community. We don’t exist to brainwash people into believing what we believe. At the end of the day, we just want people to leave our club with a more world-embracing vision, regardless of what it may be.”