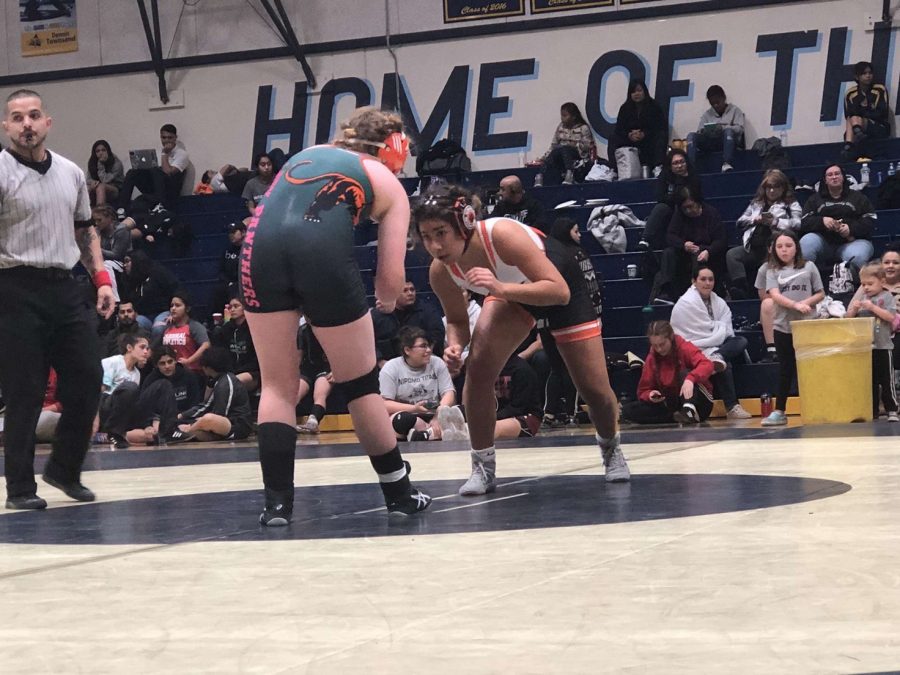 Ireri Mares faces off opponent on the matt. Photo Contributed By Anahi Soto

The Selma High girls wrestling team took third place as a team at a tournament in Porterville against 12 other schools on December 7, 2019.

With this strong start, the season is just kicking off with official practices that began to take place in October.

The girls have been training hard with long days in advance to the season with a goal for success.

“During off-season, we do weights every other day,” said varsity junior Vanessa Mares. “The other days we go on the matt to wrestle and drill a little. Nothing to heavy.”

This training has begun to extend into the school day during a sixth period offered to the wrestlers on both the girls and boys team and is continued after school. They offer this extra dedication to the wrestlers in order to let them have more time on the matt practicing for their matches.

“We’ve been lifting since summer and we have our 6th period now so we get started on practice a lot earlier for drilling,” said varsity sophomore Ireri Mares.

The girls also balance these practices with their day to day life as a student to be able to continue on.

All this hard work is to accomplish the common goal among the wrestlers: a title in valley and placement in state championships.

In her fourth year of wrestling, Vanessa Mares has her own personal goal of making it to state and placing.

“Last year I qualified for state and this year I actually want to place,” Mares stated.

The team also works as a whole, striving for a title among for valley, league, and state placements for the season.

With the new season also comes new faces among the team and a goal for a stronger bond amongst the wrestlers. As they put in all this work, they not only train physically, but continue to grow mentally with team bonding. This community within the team is part of the pathway to their success.

“All of varsity is really close, but we need to reach out and connect with the new players,” said Mares.

There is a lot of anticipation among the team for what’s to come next for the season.

“I’m excited for new improvements and the new friends I’m making. As well as the new memories the team is going to make together,” Soto enthusiastically said.

The girls have a long road ahead to meet this goal and their next match will take place on December 21, 2019 at Central Valley High School.