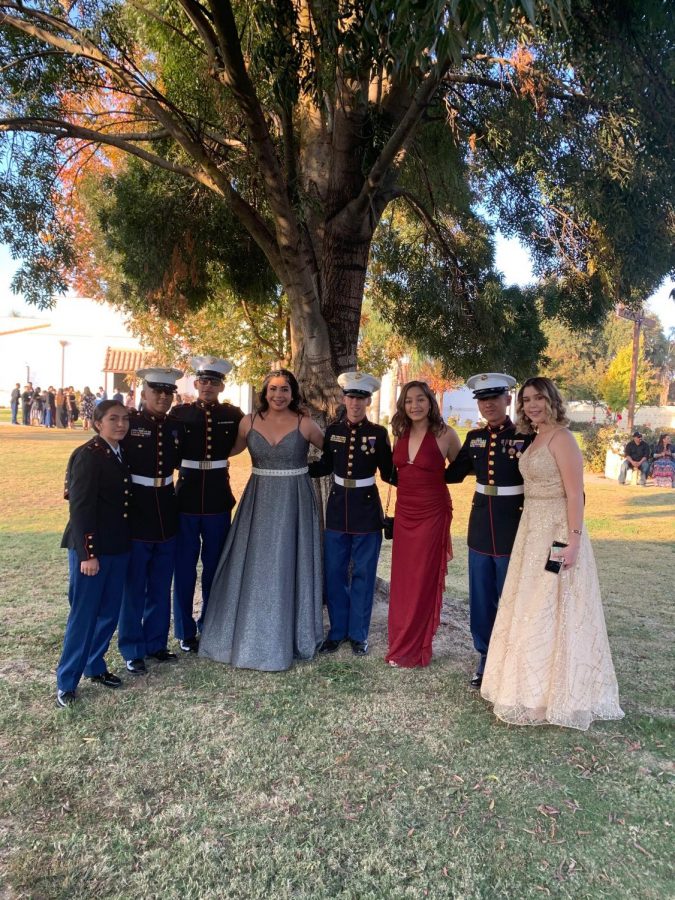 On Saturday November 9th Selma Highs MCJROTC held their annual Marine Corps Ball at Monsignor Daniel M. Lopez Hall in Selma. This is done in honor of the Marine Corps tradition of celebrating their official birthday on November 10th.

Before 1921 the Marines would celebrate their recreation on July 11th. This changed after the first formal Marine Corps ball was held in 1925 after Commandant John A. Lejeune declared it as a Marine Corps Holiday.

The Ball was planned by the senior leadership cadets and is observed by Master Sergeant Cruz and First Sergeant Romero.

The night is not just confined to a Dance. The Selma High MCJROTC try to keep the night as close to the same as would Marines do. Starting with a Cake passing ceremony, followed by a speech given by a guest of honor, then to dinner, and ending the night with a dance.

“There is a cake cutting ceremony… passing of the cake from the oldest cadet to the youngest that represents passing down tradition from generation to generation”, said Marine instructor Master Sergeant Cruz.

Something that differed from the Marines is they were able to promote a couple of cadets based on their for their actions throughout the school year.

“Being promoted was scary because you have a lot of people staring at you but they are happy that you made it through your first year”.

Along with this event celebrating the birthday of the Marines, this is a way to build a sense of community within the program. Cadets are required to bring a date, either a fellow Cadet or another high school student. Everyone is welcome to attend the Marine Corps Ball.

“The Ball was interesting and exciting,” said freshman Primavera Vargas.

This was her first Marine Corps Ball, but for others it was their last. Senior Jason Porras a Cadet First Sergeant who has been in ROTC for three years and has attended the ball every year since he joined. He had the honor of giving the same speech the 13th commandant of the Marine Corps, John A. Lejeune, that he gave on the Marine Corps Birthday at the Ball. Even though this was Porras’s last Marine Corps Ball it was his most enjoyable.

“The senior picture with the instructors was the most memorable moment from the night,” said Jason Porras.

The students truly appreciated the time and effort that their instructors put into planning the event. Cadet Private Brian Rios thought this year went much more smoothly. He believes this is in part because people followed the rules, and it was a much more enjoyable experience than the previous years. People enjoyed the music played throughout the night, it would get them ready to have a good time. Junior Emmalie Salazar thought the night started off a little haywire because they were not able to rehearse with the DJ.