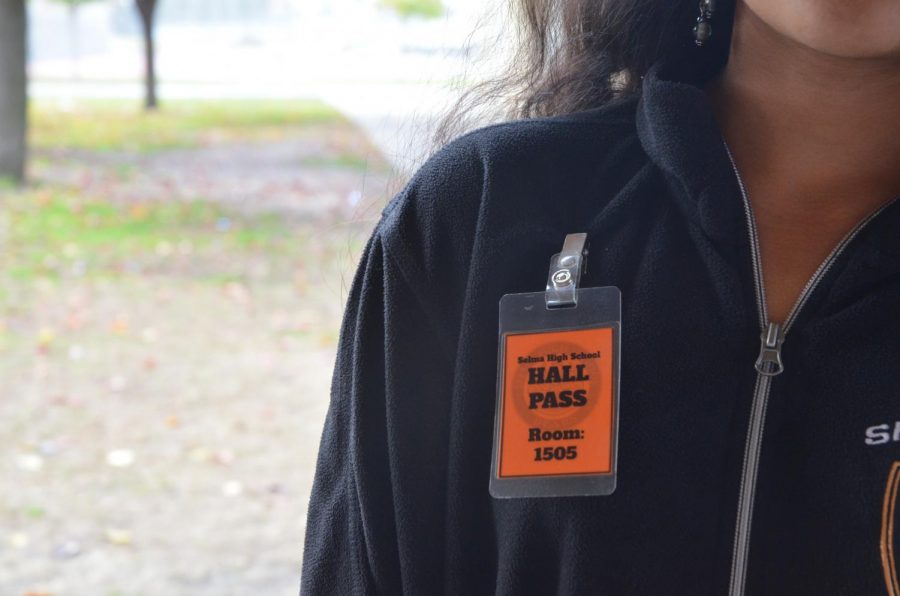 Selma High School implemented a new hallway pass policy that took effect on Nov 18th, 2019. Students will now be required to carry an orange laminated hall pass when out of class, indicating where they come from. Teachers’ aids will also be required to carry a turquoise laminated pass. Those without a hall pass will be given after school detention.

Vice principal Mr. Wisely announced this new policy during the Friday video bulletin on November 15th, 2019. Students and teachers alike have been adjusting to this new practice.

Staff members indicate that this new policy was implemented within the best interest of the students and improving campus safety as a whole.

“The pass policy makes it easier on everyone in general. It helps us identify where kids are supposed to be,” stated campus security officer Kenny Ortiz.

“Not all classes have a hall pass. Some have a toilet seat or a toy, so this makes it easier for everyone to know where they’re supposed to be,” stated Principal Lopez.

Reports from campus security officers indicate that the number of students roaming the halls during class periods has significantly decreased since the policy implementation.

“I’ve been checking with campus security, and the number of kids wandering the halls is way down,” said Wisely.

The practice has seemingly been well-received by the student population, many acknowledging the motivations behind it.

“I think the purpose was just to keep track of the students and keep us safe,” said junior Zavana Gonzales. “People are crazy these days and anyone could come on campus.”

Other students find the change bothersome.

“I’m a TA so I experience it daily. Personally I think the new policy is rather annoying and unnecessary,” said junior Jason San Miguel.

Some staff hope to hear input from students regarding how to improve these systems in ways beneficial to both staff and students.

“If anything we can always improve upon the policy, but really we just want to make sure kids are safe and we know where they are,” affirmed sophomore learning director Mr.Collazo.