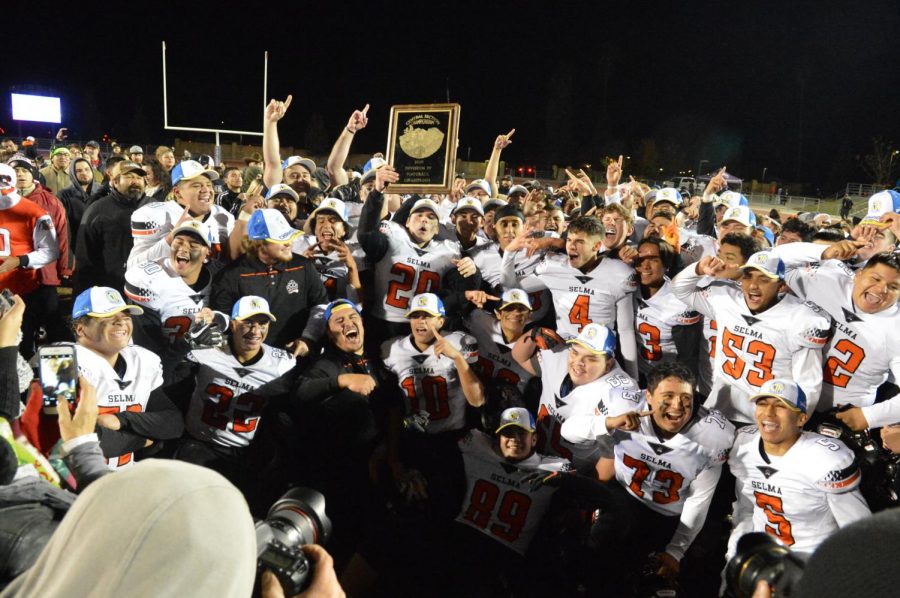 The Selma High Football Team made history on November 29th as they went on to become Division IV Valley Champions after beating Washington Union with a score of 35–21. Selma first lost to Washington Union earlier in the season but was successful while battling for the Valley title. The team will now move on to the state playoffs; this is the second time Selma has won the Valley Championships, with the last time being four years ago.

Many of the players were excited to see their team make Valley playoffs after being unable to do so the previous year.

“This is my first time making it to the playoffs,” said senior Johnnie Cerda, “It’s been a really good experience.”

The key to the team’s success this year compared to last is the dynamic between the players.

“We have fun, and we’re really close,” said junior Angelo Dominguez, “We always have these team dinners right before a game and talk and go to each other’s houses.”

The strong bond they share has translated into an uncompromising performance on the field.

“This year we really bonded and made sure that we held each other accountable as a team,” expressed Cerda.

Selma’s football team practices everyday after school, a testament to their dedication. Each day, they progress and further master their plays, creating the driving force behind their victory as Valley champions.

“We got a lot better compared to last year and the beginning of this year,” stated football Coach Logue, “We’re just gonna continue to progress and get better and better.”

Winning the valley championship has been the ultimate goal for the team ever since the season began.

“It’s always been in our eyesight the entire season, and it felt great beating Washington Union,” said senior Angelo Atkinson, “It was just a really good feeling overall.”

The team has now played for the first time in the state playoffs against Highland High from Palmdale, something the players have worked tirelessly towards.

“We’re watching film and we’re gonna get out there on the field and see what they do. This week is gonna be more a of mental type of preparation,” explained Atkinson.

The Selma High Football Team is proud of what they have achieved, and they look forward to future success in the years to come.