Football Has High Hopes for Playoffs 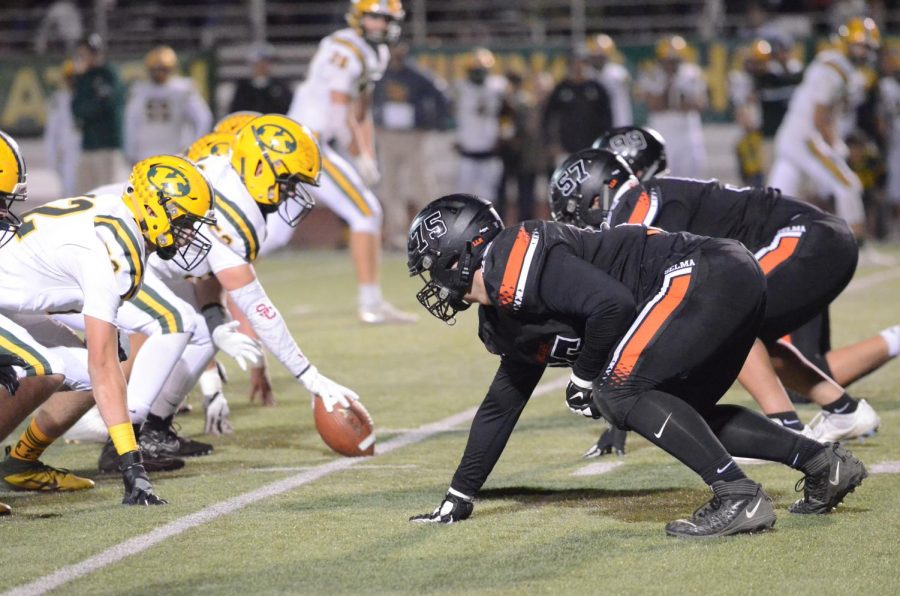 The Selma High football team face off against the Kingsburg Vikings. Photo by Mia Salinas

On November 1, The Selma High Varsity football team lost to long standing rival Kingsburg High School at the Reedley High Stadium in competition for the famous Fire Extinguisher Trophy. The score was 43-27. Despite the loss, team members are still hopeful for what’s to come.

“It was a tough loss but we still got playoffs to go and four weeks to win a Valley Championship,” said senior Jeremiah Holliday with a positive outlook.

The team’s coach, Coach Logue, also has high hopes for this year’s team in regards to their attitudes, mindset and work ethic.

“This team has done many things well. They’ve really paid attention to details and do the little things right,” stated Coach Logue.

Varsity football has been continuing its season with optimism for the future. The team has won eight games out of the ten bringing a new attitude not only to the team but to fellow supporters. The team has been constantly working to better themselves to achieve a successful outcome at playoffs this year. If Selma manages to win two playoff games they will have the opportunity to play at Valley Championships.

“The season is going great, fully to our expectations,” stated Holliday, wide receiver for the team.

In order to achieve their goals the football team has weekly after school practices and lunch meetings to analyze plays.

“Everyone is doing their job,” commented Junior Joesiah Flores.

“I try to play the best I can every game,” adds quarterback Joey Ramirez

Despite the two losses and the lack of a home stadium due to construction, the Selma High Football team will continue to strive and keep their head up high while going into the last four weeks of the season where playoffs and Valley Championships await them.