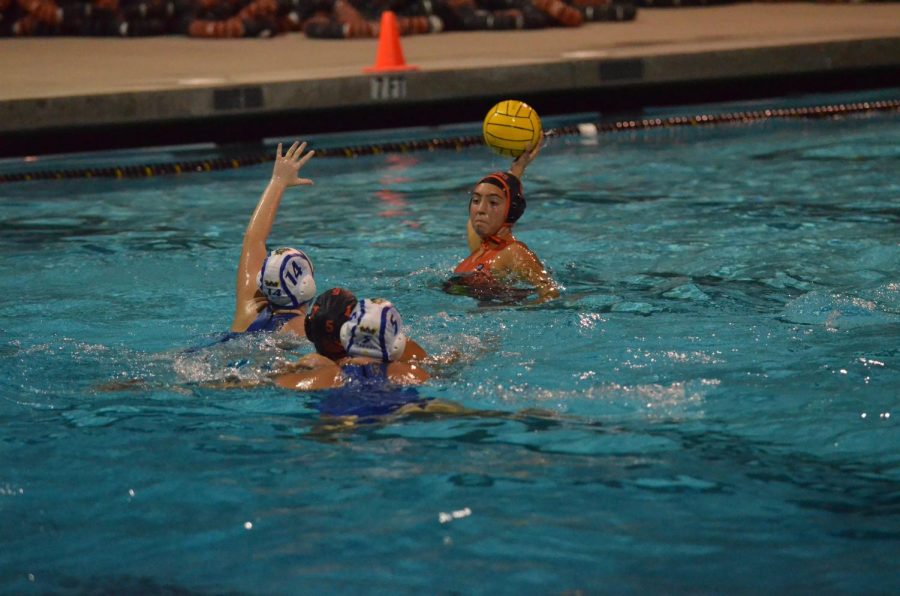 Varsity junior Julianna Colado in action as she shoots a goal. Photo by Victoria Quintana

On Thursday, October 17, with a score of 9-7, a broken nose, and additional injuries, the Selma High School Varsity Girls Water Polo team beat their rivals, Kingsburg for the second time. The team has been consistently winning their league games with an undefeated final record of 8-0.

“We passed one of our goals, which was to beat our rivals,” said freshman Makaira Chavez.

The team is preparing to keep this winning streak going for playoffs, which began on October 6th. Coach Wood prepares the girls for playoffs by conditioning them every week day at practice, along with some Saturdays. They know what they need to work on to be a successful team.

“[We need to work on] shooting and more accuracy whenever we get pressured,” stated Arriella Allvarez, who is the team’s goalie. They not only focus on the physical side of the sport, but on the mental side, which is essential to becoming a victorious team.

“Mentality [is important] because if you let anything get to you mentally, it ruins the whole thing and will get to your teammates,” stated Abigail Baker, who usually plays an outside position or driver.

“[Success comes from] being able to work well with others,” added Coach Wood. “It can’t be all about you.”

Each player has their own special qualities, which makes them better as a whole.

“I’m really competitive,” explained Claire Machado, who plays driver and hole set. The driver is the person who sprints for the ball at the beginning of a play, and hole set is someone who gets the ball moving. “I’m really aggressive, and I want to do my best.”

“My personal best qualities are throwing or sprinting,” said Alvarez.

A major goal that the team has is to make it to Valley, which is the valley championship in their division, D2. They have intense practices to prepare them for each game in the playoffs leading to Valley. In order to make it far, the girls have to push themselves to their limits.

“We have to play our best game. It’s going to take teamwork and staying mentally focused,” said Coach Wood.

“[For] each game [in the playoffs, we need to] take it as seriously as we would as if we were playing a Valley game because that’s what it takes to get to that level,” added Machado.

Water polo isn’t a sport that is well known to the students on campus because there are many misconceptions about it.

“A lot of people don’t know it’s aggressive. I get that a lot,” said Machado. “They haven’t heard that much about it and haven’t gone out and watched us.”

“It’s hard to understand the plays, and I feel like they’d be more into it if they knew. It’s a little underrated,” explained Baker.

Nonetheless, the girls water polo team has high expectations for themselves as their season comes to an end, and they need student support to cheer them on as they fight to win one game at a time.