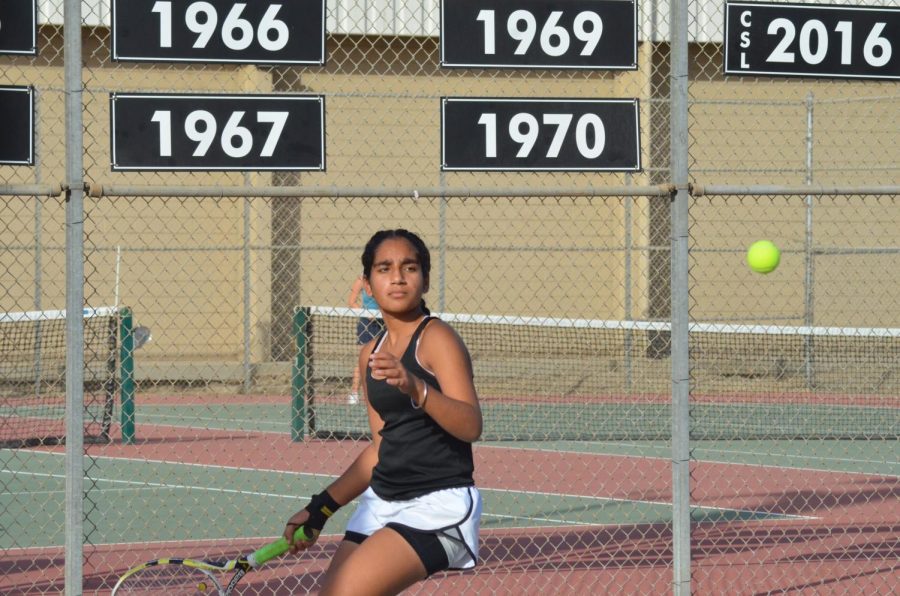 It’s been a mixed bag of results with the Selma High Girls Tennis Team, having lost a rivalry game against Kingsburg on October 22 yet winning against Yosemite High on October 30 at their first playoff match.

On October 22 the team went toe to toe yet again with school rivals the Kingsburg Vikings, this time on Viking courts. While the Vikings may have won, the Selma High girls ended their league season with good spirits and enter playoff season with bright attitudes.

“Pre-season kind of scared us but the girls have come a long way improving themselves in our league,” states Coach David Cortina.

Throughout the season personal goals have already been met and continue to be improved on.

A week prior on October 15th, the team won, 8-1 against Immanuel High School, which was both its last home game of the league season and Senior Night. They’ve kept up both their energy and focus to prepare for the last few games of the season.

“Everyone’s putting in 100% effort at practice and at games, so I’m pretty proud of the way we’ve been playing,” expressed senior Emily Sanchez.

The team stands at 8-4, having won 8 matches and lost 4, and is ranked third in league. Making it into playoffs has been a team goal for the entirety of the season, and now the push into the next part of the season is one for which the girls are both ready and continue to work tirelessly.

There’s a total of six playoff matches. Both the girls and their coaches hold themselves to high standards as they prepare for each important match.

“They’re still fighting, and that’s what I look for in a good athlete,” states Coach Cortina.

And while the season may be drawing to a close, the seniors are enjoying the final, bittersweet, moments.

“I’m very emotional when it comes to things like this. It became a family, my teammates and I,” said senior Elisabet Gonzalez. “It makes me happy, though, that I’ll leave with good memories.”

The next match for the team will take place on Tuesday November 5th against Central Valley Christian. The girls await and prepare with both excitement and determination.